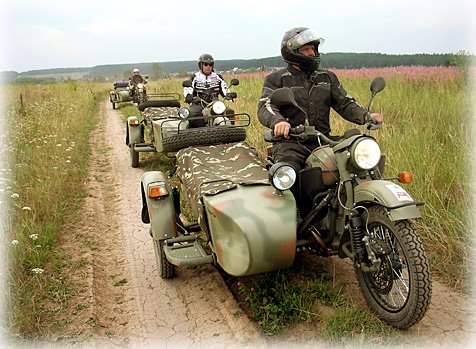 A motorcycle for urban cowboys

The coating: matt. Always matt. In different shades, but guaranteed no chrome – definitely not shiny. A huge advantage as the rider is relieved of endless hours of polishing to keep the machine looking good – it ALWAYS looks good!

Scud, Pershing or Kalaschnikov are not included in the specification, although up until 2006 there was at least a holder for these toys on the sidecar boat; it was also useful for the fishing rod on the salmon hunt in Norway. This device fell victim to the Russian export restriction of military equipment.

A motorcycle like no other.
The Ranger conscripts are well kitted out and have the best ground clearance of all the Ural bikes. The sidecar wheel is engageable but with no differential. This guarantees a beautiful straight line drive in the most difficult terrain (but beware – sidecar drive definitely NOT recommended for tarmac roads with hairpin bends!)
For the pilot the sturdy flat twin 750cc engine is easy to start at the push of a button, or for the really macho, or those in need of some physical training, a kickstart exists. The console has a simple but functional design; warning lights in green, red and blue, a speedometer which shows kilometers per hour and miles per hour plus total kilometers and trip facility. And, as on all the Ural bikes, quality switches and levers made in Italy. All so simple that there is no need for extensive training or reference to an owners manual.

The co-pilot is also armed  –  spade, spot light, luggage rack above the spare wheel, air pump, 17 and more wrenches, screw driver, pliers, a container for the spare fuel or other fluids and a paint spray can to correct possible driving errors of the pilot.

In any case this vehicle is an eye catcher on the road and off.
Aggressive car drivers become as meek as lambs, and even motorcycle boy racers hang behind a while before they dare to over-take.
On the parking lot or in front of the coffee shop the Ranger really stands out, and when ridden in reverse gear heads really turn. If caught on forbidden forest roads the Ranger raises a smile even from the natural enemy of the enduro motorcyclist – the forester.

Today the Ranger is available in the following colour schemes:

Ranger Nato: The primary Ranger: camouflage in green-green-brown.
Surely the most military of all the Rangers.

Ranger unicolour green matt:
The most discreet of all the Rangers, if you can travel discreetly at all with a Ural!
Even hunters, foresters, farmers and other natural enemies of motorcycle drivers will often turn a blind eye to a green matt Ranger when caught red-handed driving over forbidden meadows, and forests.

Ranger Gobi: Camouflage cream-beige-brown. Since introduction to the market in 2011 it has become the number one on the popularity list of Rangers. The Gobi is not as military in appearance as the Nato, much milder. Even old-hippies buy this bike.

The Ranger shown here is equipped with optional accessories for which there is a supplement payable: